It may have taken a while but I’ve finally gotten around to writing about our tour of a German castle that I mentioned in previous posts! While we were staying in the German town of Cochem I shared some photos of our walk (up a massive hill) to the castle but that day we didn’t go inside. A few days later, after it snowed, Dennis and I returned for a tour of the interior of the castle, while there was still some snow to be seen on the castle rooftop and surrounding vineyards.

Built in 1000 A.D by the Franconian Palatine counts, the castle was seized by the German emperor in 1151. In 1924 another German King pawned it to the Archbishop of Trier and in 1689 the castle was totally destroyed by French soldiers under King Louis XIV. It was left as a ruin for another 200 years before being reconstructed by a rich merchant from Berlin (Mr. Louis Ravené), in the style of a nineteenth century chateau. In 1942 Mr. Ravené’s descendants were forced to sell the castle to the Reich and since 1978 it has belonged to the town of Cochem and is now a tourist destination with guided tours, a restaurant and annual events and festivals held within its grounds.

Just seeing the castle from the outside, and admiring the views of the river and town of Cochem below is in itself worth the visit, but as an Aussie I absolutely love to visit castles and if there’s a chance I can get inside it then you can bet I will do so!

One of the things I loved about the castle, both inside and outside, were all the cool little details you could find! I liked that they have a water bowl for dogs who have been walked up the hill, as well the the little dragons in the fence-posts on the ascent!

There was even a little knight fending them off!

But anyway, on to the tour! The tour is in German, but they give you a paper handout which explains the details of each room/part of the castle so it was still just as interesting.

The dining hall was full of beautiful wood-carvings and the ceiling is decorated with poker-work, where designs are burnt in and then painted.

We visited the Gothic room and the Romanesque room, where we could observe very beautiful paintings on the ceiling, as well as a secret passage and… Dutch tiles!

Something I loved were how many beautiful stained-glass windows there were all through the castle, some that you could still see out of, and others with fantastic images in the glass.

The hunter’s room, of course, was filled with stuffed animals, such as badgers and crows, and the mounted heads of deer and a boar that apparently weighed more than 400 pounds (180 kg) when it was alive. In here there were also some huge decorative tankards, they would contain the amount of ale a monk was allowed to drink in one day – which was five litres!

More details in the wall decorations that caught my eye:

After the Hunter’s room we entered the Knight’s Hall, the largest room in the whole castle (most of the rooms were pretty small). I was a bit baffled about the big statue out the front of the castle – that looks like a giant frog – but according to the information it is actually a heraldic lion; a lion wearing a knight’s helm with the visor down! There are two over the fireplace in this room as well.

Not entirely sure of the significance of the statue below, he looks like he’s break-dancing to me!

In the weapons room we saw a beautiful carved balustrade on the staircase, as well as a huge wardrobe which is apparently the most valuable piece of furniture in the whole castle; early renaissance dating from the 16th century.

There were also suits of armour and weapons of course.

Detail of one of the suits of armour:

One of the most interesting parts of the tour, for me, was seeing this mermaid lamp, which is supposed to be a symbolic figure to keep evil out of the castle. It’s not exactly what you expect to see when you think ‘mermaid’, but it’s certainly interesting:

Outside again we looked at the well, which is over 150 feet deep, and gazed over the battlements at the hills and vineyards of the Moselle valley, and took same final photos of the exterior of the castle.

The huge four by eight metre mosaic on the outside of the castle walls is of St. Christopher, and is meant to be a reminder of how colourful the castle would have been during the middle ages.

I hope you’ve enjoyed reading about our tour of Reichsburg Cochem as much as I enjoyed doing it! If you’d like to read about visiting a nearby fairy-tale castle check out this post on Burg Eltz or perhaps you’d be interested in castles in Luxembourg? Don’t forget to pin this for later and let me know in the comments what the best castle you’ve ever visited is! 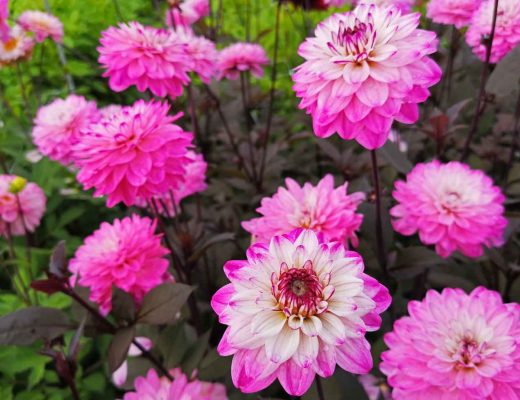 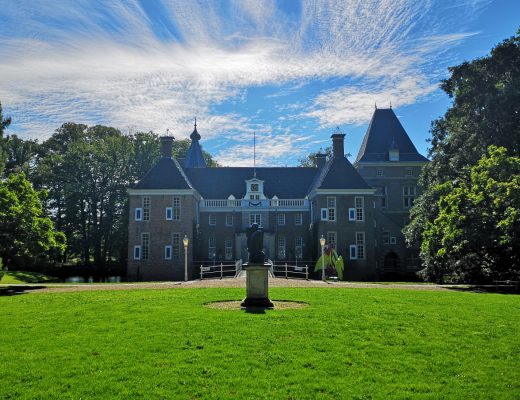 Castle het Nijenhuis and the Coolest Sculpture Garden (Ever?!) 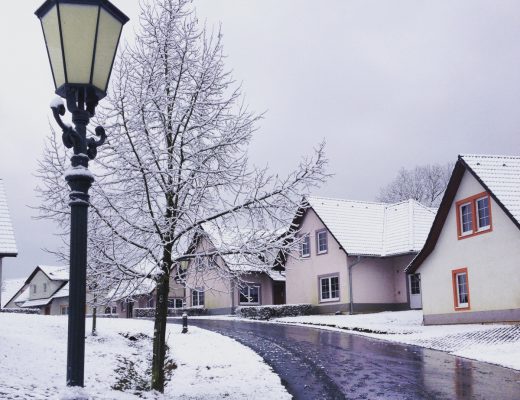