I’ve written a few posts about our trip to Luxembourg (check them out here) and two of the things I noticed while we were there were 1) the country is tiny, so you can get from one end of the other pretty quickly; and 2) there are lots of awesome castles to check out! I thought I’d do a post sharing three of the coolest ones we saw, all of which are within an hour’s drive from Luxembourg City! While there are lots of great posts out there about the city itself, not many people seem to venture out into the countryside, but you’re really missing out if you don’t. So if you have a car and a day or so to check out some interesting and picturesque towns and castles, then these are my three top picks!

Located near the town of Bourscheid (and just up the hill from the hotel we stayed at, check it out here) this castle is situated 150 metres above the river Sûre and is enclosed by a circular wall with 11 watchtowers. It is very easy to access, there is a free car-park across the road and hardly any climb to go into the castle itself. 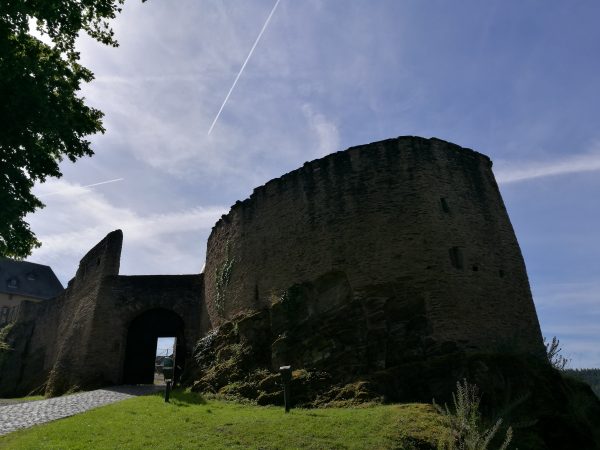 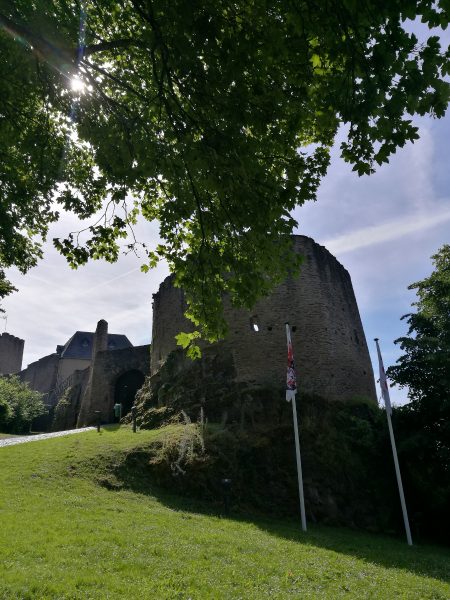 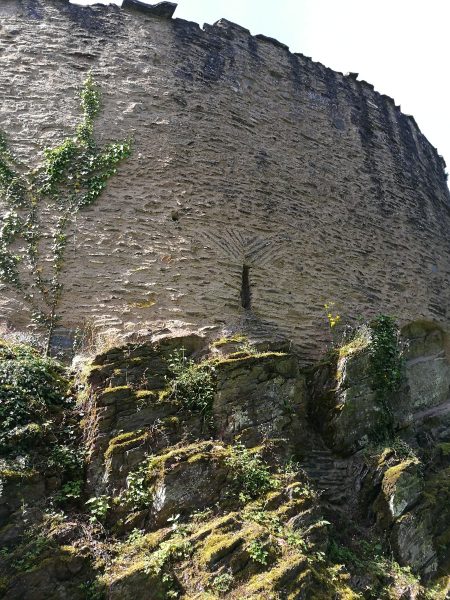 The castle has been partially reconstructed so that visitors can picture its former size and splendour. It was built around the year 1000 and was almost unassailable by medieval weapons because of its ideal location on top of the cliffs. You can listen to audio guides to learn more about the castle as you wander around but be warned that you can only purchase entrance with cash and they don’t accept any form of electronic payment so make sure you have money on you! We didn’t end up going in, partly because of this and partly because the lady in the ticket office was a bit rude. But the castle looks impressive nonetheless. Entrance costs five euros for adults and you can find out more about visiting on the website. 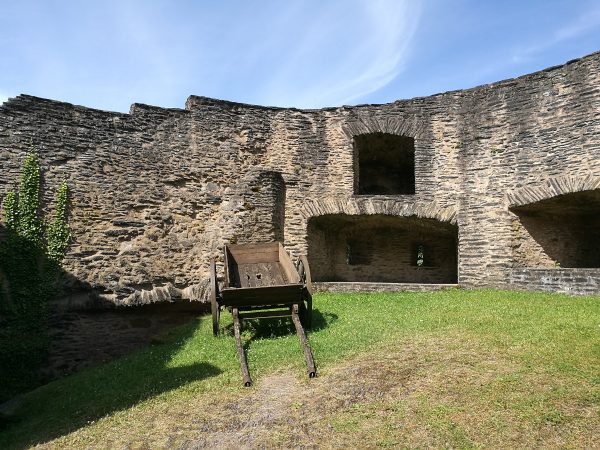 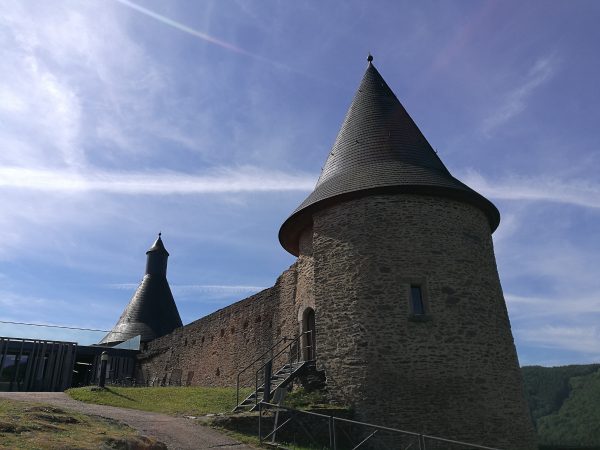 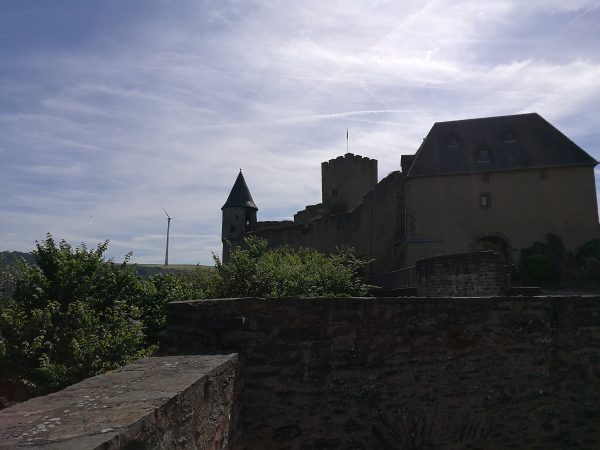 The village of Bourscheid is just a little further up the road and is also rather pretty, with a lovely view over the plains. It’s also a rather nice quiet place for a wander. 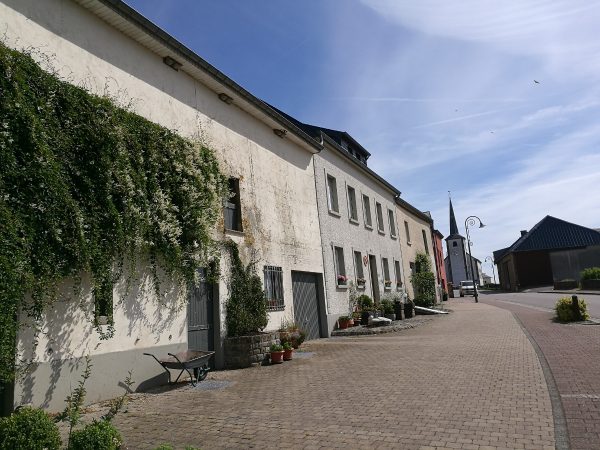 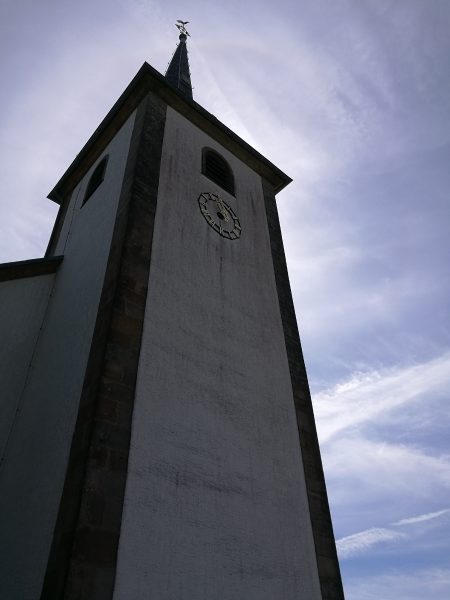 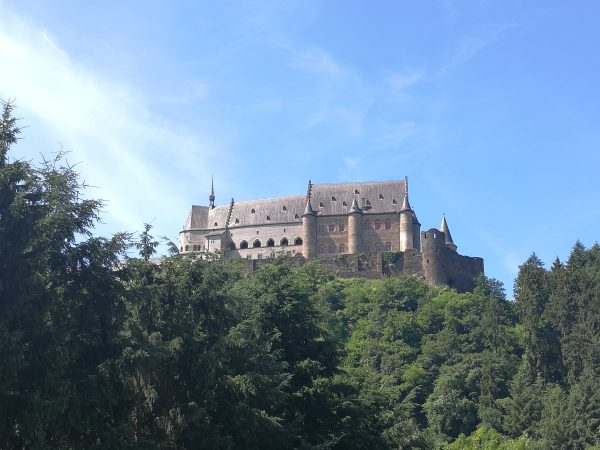 I wrote in detail about this stunning castle here, and it is definitely worth a visit if you’re in Luxembourg. Also situated on a hill, this castle overlooks the charming town of Vianden, has been used as set for a number of movies and has lots of displays, demonstrations, tapestries and other beautiful things inside. 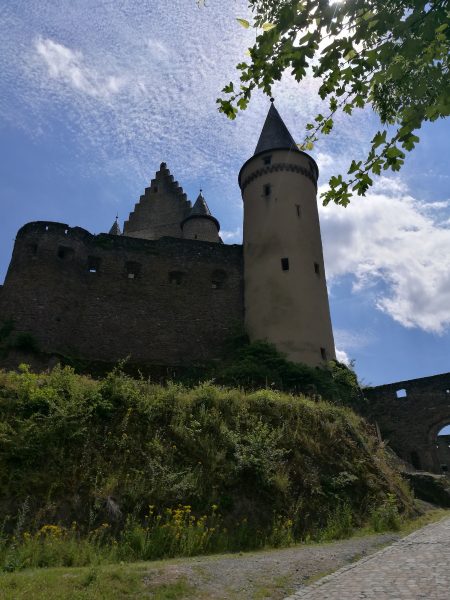 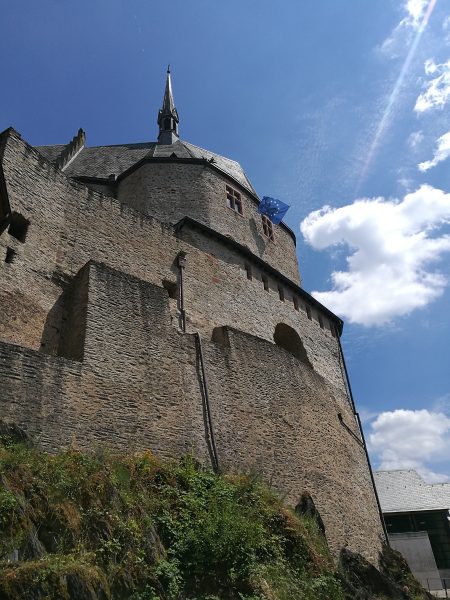 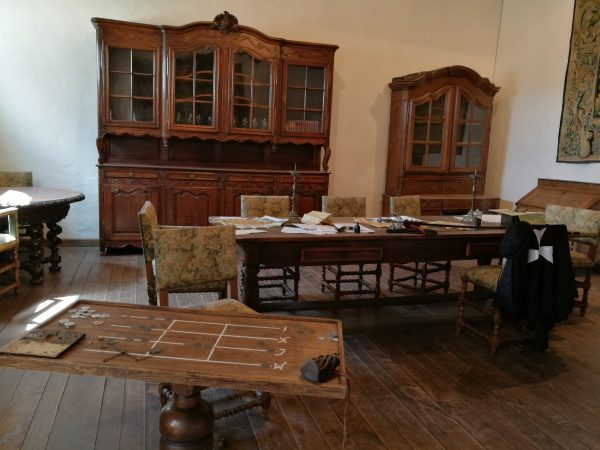 There’s a bit of a hike from the car-park to the castle and the self-guided tour does take you all over the castle as well as up and down a lot of stairs. It is also definitely worth spending some time in the town below, as it is just as beautiful as the castle itself! For more information on this stunner, either check out my blog post and/or the official website here. 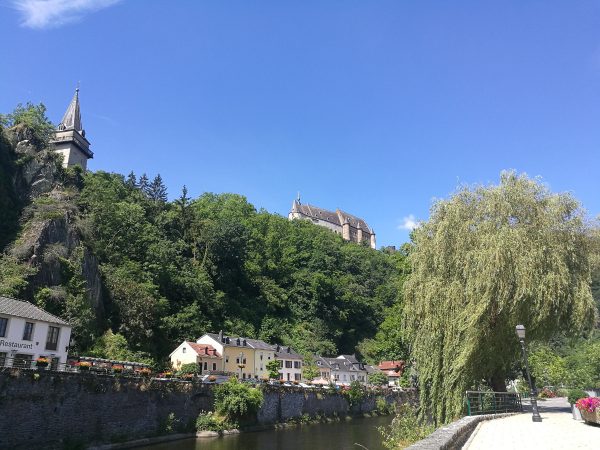 For a tiny town, Clervaux packs a lot in. This town is not only home to a castle (with a UNESCO world heritage photography exhibition inside) but also a lovely cathedral AND a beautiful Benedictine Abbey! The castle and cathedral are both placed on a small rocky spur in the middle of the town, while the abbey overlooks them all from a nearby hillside: 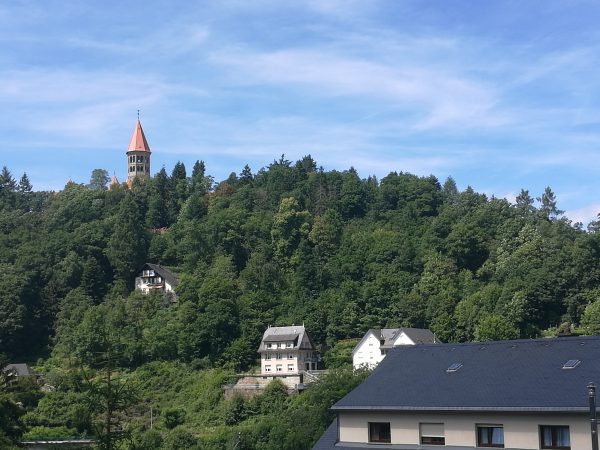 The castle is very striking with its white walls and dates back to the 12th Century. It was rebuilt after being destroyed by fire during the Battle of the Bulge in the Second World War. Now the castle houses an exhibition of models of Luxembourg’s castles, a museum devoted to the Battle of the Ardennes and, of course, The Family of Man photography exhibition. We ran out of time to explore the inside of the castle or cathedral, mostly because we got distracted by the beautiful Abbey of St. Maurice and St. Maurus of Clervaux. 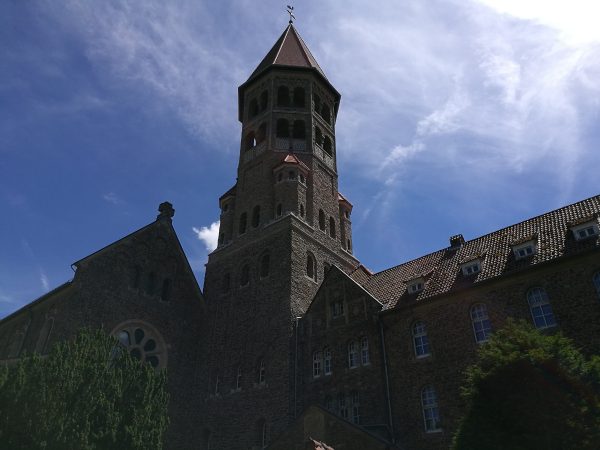 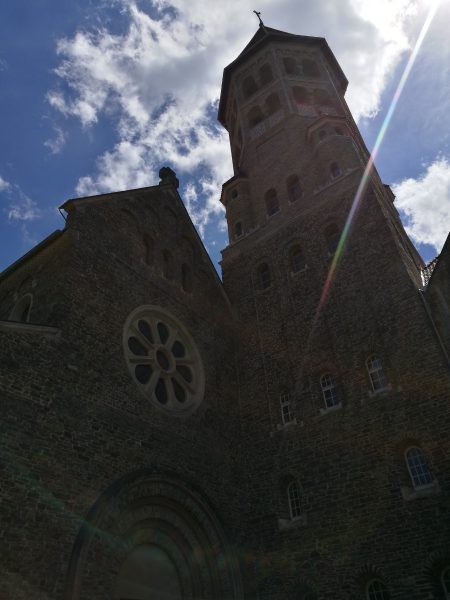 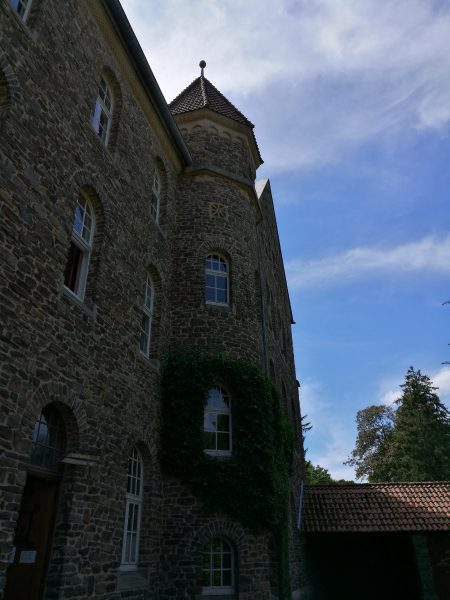 The Abbey was built in 1901 and today is home to Benedictine monks from various countries. If you manage to time your visit right you might even be able to attend a service and hear the traditional Gregorian chant, of which the abbey has produced several recordings. If you would like to hear some, check out the abbey’s website here. We didn’t have time to stay around to listen, but the recording on the website is lovely. 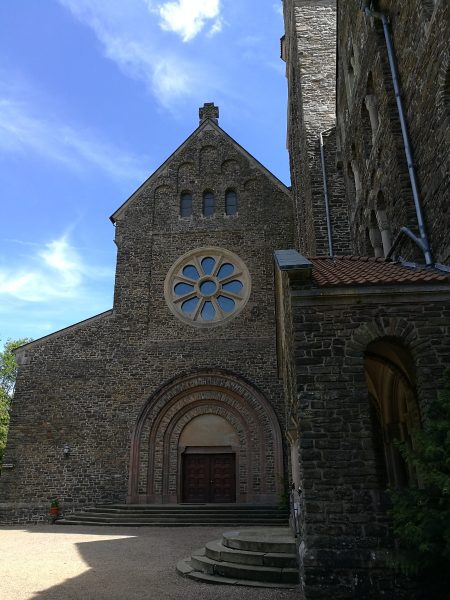 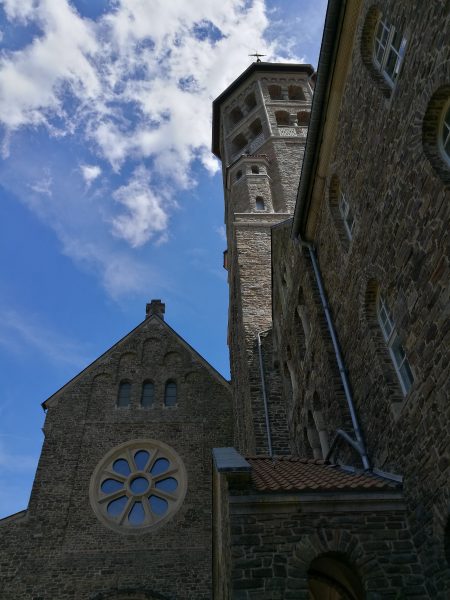 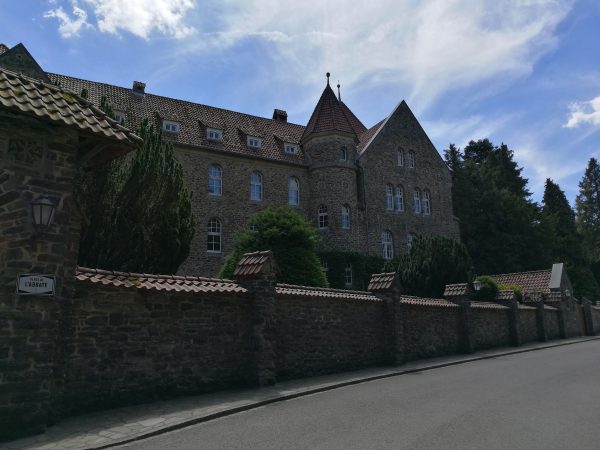 As you may have noticed, while all three of these castles and other attractions are only about an hour away from Luxembourg City, you will probably not have time to squeeze all three into one day! I mean, maybe you could but we certainly couldn’t. So while I definitely recommend each of these destinations for a trip, I would suggest only trying to do perhaps Vianden and Bourscheid in one day and allowing yourself a full day if you want to see everything in Clervaux.

Let me know in the comments if you do go, or have been, to any of these places – which was your favourite? Have fun castle hunting!