I have now officially been living in the Netherlands for a month! Apart from lots of walks in the park and patting farm animals (in my last post) I have also been becoming accustomed to riding pillion on a motorbike, going wildlife watching and celebrated King’s Day.

To get to where I am now living you travel from Amsterdam, through a city called Almere to Lelystad. In between Almere and Lelystad is a nature park called the Oostvaardersplassen (yes, really, but don’t ask me to pronounce it)!  This nature park was purposely created, no buildings have ever been built on this land and it has been used to re-introduce many animal and bird species that were no longer living in the Netherlands. It has many access points with ‘hides’ set up for wildlife watching which are the perfect short destinations for Dennis and I to ride to while I get used to being on a motorbike (as we don’t have a car).
Last time I was here for a visit Dennis and I watched a documentary film (De Nieuwe Wildernis) which had been filmed in the Oostvaardersplassen, chronicling the changing of the seasons over the course of a year. The film was breathtaking and if you are able to find it I would definitely recommend it. Otherwise, just have a look at the trailer for it here, which is also stunning.  While the narration is in Dutch you don’t really need to know what’s being said to enjoy the music and images.

So on our first bike ride we visited one of the hides in the wet area in the northeast of the park as it was only about a fifteen minute ride away.  There is a huge lake on one side (we couldn’t even see the other side as it was a bit overcast) and wetlands with a walking path on the other side.  We saw lots of geese with goslings but the mothers rushed their babies off before I could get any decent photos!

There were so many birds calling in the trees and grass, and we saw lots of little paths where animals have walked through but didn’t see any wildlife until we got to the hide.

There were lots of swallow’s nests inside the hide, and the swallows were swooping in and out and singing like mad while we were in there.  We saw some more geese and ducks out on the water, and some really big fish jumping as well!
A few days later we drove out to another spot, not a hide but a lookout over the plains. Again it was fairly overcast but we saw lots of geese (again!), some cows in the distance and one of the wild horses.
That was also the day I saw my first official tulip field in the Netherlands!
On the 26th April the Netherlands celebrated King’s Day (it’s officially the 27th but they celebrated on the 26th as it was a Saturday I suppose), the birthday of the country’s reigning monarch.  From 1890 until last year it had been Queen’s Day, but now King Willem-Alexander has succeeded his mother and the country has just celebrated it’s first King’s Day.  Basically all the Dutch dress in orange (the national colour), party and go to ‘vrijmarkts’ (free markets) where everybody sells all their unwanted items.  So Dennis and I rode out to Almere and stopped at the lookout again to see if there were any other animals to see, and there were!
It was a lovely sunny day too, and we got to see lots of cattle, more geese and, off in the distance, more horses and some deer.
We continued on to Almere to have dinner with Dennis’s family before visiting some of the markets.  We also had some special food for King’s Day; vanilla slice with orange icing and little Dutch flag lollies on top! It was very yummy, definitely my kind of tradition 😉
We browsed the markets for a while, they were pretty big, so many stalls as well as music, food stalls and some kids’ rides.  Dennis’s mum also bought me a little orange lion for my collection of stuffed animals from around the world! The lion is the national animal so he’s now sitting with my Saint Bernard dog from Switzerland, my bull from Spain and my fox from England!
This was on Friday evening, so the next day Dennis and I also visited the markets in Lelystad.  They were mostly more of the same, although there was also a stage with some bands performing. The big line of cans in the picture below were for sale, 20 cents each. Not quite sure what you’d want them for though…
So that’s what I’ve been up to this month. Next week is Liberation Day, when the Dutch celebrate the day they officially became free of German occupation during WWII so stay tuned for more posts coming soon.
If you are interested in reading a bit more about the nature park have a look here or here.  Until next time! 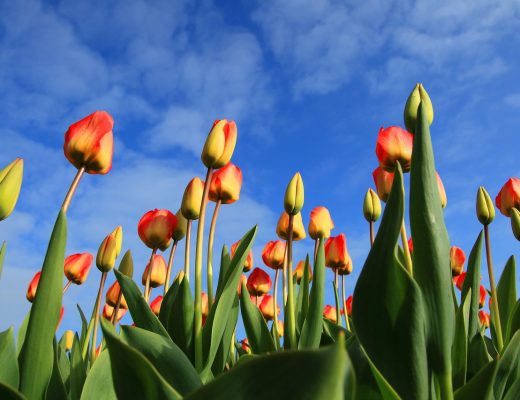